The U.S. product placement marketplace expanded nearly 13% in 2014 and is on track to beat that growth again this year, according to the 2015 edition of the Global Branded Entertainment Marketing Forecast released this morning by PQ Media.

“While TV remains America's most consumed medium, viewing of first-run programs is declining in favor of time-shifted video, often to avoid traditional 30-second ads,” reads the report, noting: “As a result, product placement has strengthened its position in the multimedia campaign mix. In addition, U.S. marketers have become savvier about integrating brands and products into program content instead of settling for less expensive brand or product cameos.”

U.S. TV product placement integrations accounted for the lion’s share of the marketplace, surpassing $4 billion in 2014.

All told, the sector is outpacing the rest of the marketing services industry’s growth, says PQ chief Patrick Quinn, projecting it will rise to $11.44 billion by 2019. 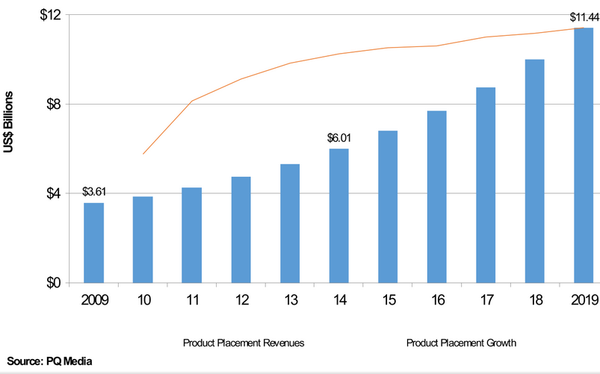