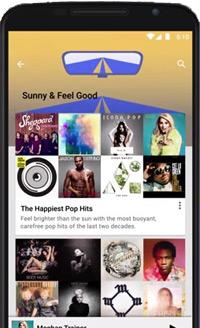 Google has rolled out a free, ad-supported music service that allows people to try Google Play Music without paying. The ad-supported radio service aims to complement the $10-a-month subscriptions that give members all-you-can-hear access to songs and a storage locker for the songs they already own.

"Free music for everything you do," the tagline for Google's latest service, curates playlists designed to accompany moments in a day based on historic data that Google has collected on the user. The stations are not new, but now everyone in the United States can listen. The playlists are available on the Web and are rolling out to Android devices this week, with an update for iOS coming soon, writes in a blog post published Tuesday by Elias Roman, Google product manager.

The service spawned from the folks who created Songza, which Google acquired last year, allows people browse the stations by genre, mood, decade or activity. It also offers the ability to search by a favorite artist, album or song to create a station of similar music from its library of more than 30 million songs.

The service goes up against numerous ad-supported steaming options from iHeart Radio, Pandora, and Spotify, as well as Apple Music, which will only become available by subscription.

While the platform enables listeners to choose the music they want to stream by mood, Google makes no mention of whether mood will become an ad-targeting factor.

Google Play Music will, however, incorporate TrueView ads, which allow consumers to skip the commercial after a few seconds. It will work the same as on YouTube, where advertisers don't pay for the ads that are skipped within a specific amount of time. The service also offers ad-free, offline and background features for music videos on YouTube.