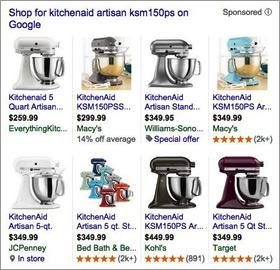 Google is testing a feature in sponsored Product Listing Ads that informs shoppers of the percentage they save from specific retailers and brands. The comparison shopping tool appears to augment features such as Special Offer in PLAs, but it's not clear whether it alters the placement of the advertisement.

The experiment has been running live on a small number of queries for several months now. The focus remains on helping consumers find good prices for products in Google Shopping, such as the ability to filter products by price or for merchants to showcase promotions in shopping ads.

"As part of our efforts to help people find great deals and useful pricing information, we're currently running a small test of a feature that highlights particularly good prices for products," per a Google spokesperson.

ChannelAdvisor Executive Chairman Scot Wingothinks it's a strategyto better compete with marketplaces like Amazon. "It's the first time we've seen Google think about the price of the product being sold," he said, noting that ChannelAdvisor first spotted the feature. "It's a big watershed moment for Google, because they now realize the need to cross the boundary from a pure ad platform to more of a marketplace that aligns more closely with what consumers want."

Wingo said it raises an interesting question, which ChannelAdvisor plans to test: does it become better to pay Google the extra dollar to bid higher for a click or give consumers $1 off the item? He also said brand marketers could think that if they don't have the lower price, maybe it doesn't make sense to run the PLA advertisement.

This "innovators dilemma" could backfire, Wingo agrees. "Google's been trapped in this for a while, and as you work your way out of it, there could be unexpected consequences to navigate through," he said. "That's why I think this is an experiment to watch what consumers and advertisers do."

It's not clear where Google pulls the data to find the average online price, based on calculations from ChannelAdvisor for a "KitchenAid Mixer," the test shows a reverse from Google's traditional method of operating on a cost-per-click model with no preference given to a lower price.

Search rankings consider data quality and other signals, but at the end of the day Google typically creates competition by the brand willing to pay the most through a cost-per-click auction (CPC). The model, Wingo said, in many ways misaligns with what customers want, because more often the brand who will bid the most for keywords sells their product for the highest price.

Competition to sell products at the lowest price can also be seen at stores like Nordstrom, but many luxury brands are standing their ground to focus on raising customer service standards. Neiman Marcus lowers prices for frequent buyers.