Mobile Makes Steady Gains In UK, Accounts For 48% Of All Traffic 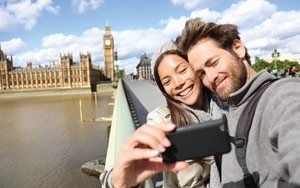 Mobile continues to make steady gains in the UK, as it now accounts for nearly half (48%) of all traffic in the country, up from 34% one year ago. That's according to a new second quarter 2015 report from Affiliate Window, whose network consists of over 1,600 advertisers in the UK.

Affiliate Window considers both smartphones and tablets to be mobile devices. Smartphone users account for slightly more traffic (26.5% of total online traffic), while tablet users are more likely to make a purchase (53.5% of mobile sales, 19.7% of total online sales).

The report says “the launch of cross-device tracking [has shown] smartphones being heavily involved in the research phase of customer journeys.” It concludes that smartphones are “not as effective at converting as tablets.”

Some 34,886 sales were generated every day from mobile devices, with 46% of those sales coming from smartphones. However, tablets still hold a larger percentage of the total sales and a higher average order value than that of smartphones.

For the first time in the UK, Android tablet users broke the 50% tablet traffic share with 52.4%, though iPhone users continue to dominate smartphone traffic with nearly 76%.

Overall, the Affiliate Window report shows steadily increasing traffic gains, but only slight sales gains in the market for mobile in the UK.