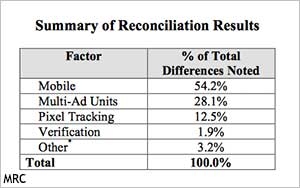 The digital ad industry is trying to put viewability into focus.

A lingering concern has been that different viewability vendors, measuring the exact same campaign, may yield different results -- even if all are accredited by the Media Rating Council (MRC), the industry’s media ratings watchdog and champion of viewability standards.

The MRC on Wednesday announced the results of the latest phase of its viewable impressions reconciliation testing -- a series of tests the group has run to combat this exact problem.

The MRC found that for nearly two-thirds (63%) of campaigns that met a 100,000 viewable impression threshold, “the differences observed between vendors’ viewable impressions counts were within what was deemed an acceptable range.”

The MRC considers an “acceptable range” of discrepancy to be 10%. Per the MRC’s findings, the average weighted differences for these campaigns was 4.1%.

Of course, this means that for the remaining third (37%) of campaigns that had at least 100,000 viewable impressions measured, viewability vendors were not coming up with similar numbers. The MRC notes that for these campaigns, the “median difference noted between vendors’ viewable impressions counts was 23%, and the average (weighted) difference was 34% per campaign).

In addition, “13% of the difference was a result of differences in whether vendors opt to measure ad traffic served in a campaign by ad servers other than themselves,” notes the MRC. This “new finding” -- simplified as “pixel tracking” discrepancies -- “will be addressed in a forthcoming update to the viewability guidelines.”

Blame for a further 2% of discrepancies was placed on the different ad verification processes viewability vendors take, and the remaining 3% fell into the “other” category.

The MRC issued its first ever guidance for a mobile viewable ad impressions just two months ago, and a key topic in the next MRC viewability guideline update -- which is expected within the next 30 days -- figures to be mobile viewability.

“Viewable counts resulting from impressions served to mobile environments should be segregated in reporting from those served to desktop. Given the growth noted in this discrepancy area in this latest round of testing, we believe this segregation has a very high urgency,” the MRC wrote.

The Interactive Advertising Burea (IAB) released its own statement on the MRC’s latest reconciliation testing results, reiterating an earlier points made that “measurement and technology improvements would be required to get to 100% viewability.” The IAB had previously called for the industry to aim for 70% viewability in 2015, not 100% (i.e. that marketers should aim for 70% of their impressions to be viewable this year, not 100%).

“The IAB has maintained that 2015 is the year of transition,” the IAB wrote in its note. “As long as we continue to make progress in isolating the causes of measurement inconsistency and remedying them, thus achieving accurate measurement, we believe that 2016 will be the year of even greater viewability and measurability.”