In A Digital World, Paper Makes Its Case 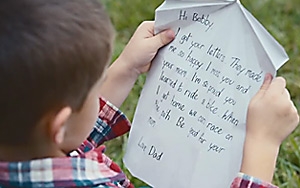 The world has become increasingly digital (and by extension, ephemeral), but paper still has a role.

The Paper and Packaging Board this week is launching a new marketing campaign to reinforce the importance of paper and paper products in people’s daily lives, even in 2015. The campaign, funded by a 2014 industry checkoff program, is intended to slow the steady decline of paper usage over the past 15 years, says Mary Anne Hansan, executive director for the Paper and Packaging Board (P+PB).

“Digitization of our lives has had an impact,” Hansan tells Marketing Daily. “In order to be relevant moving forward, we need to be part of the dialogue.”

In video spots (created by agency Cramer-Krasselt in Milwaukee), the campaign takes an emotional, storytelling approach. One spot, for instance, depicts a young boy writing letters to his military-deployed father, turning those letters into paper airplanes and casting them over his backyard fence. The boy’s elderly neighbor encounters the letters in his yard and ships them (via a cardboard box) to the father, who returns his own paper-airplane letters to be thrown back over the fence. The spot concludes with the tagline “How life unfolds.”

Other spots depict a young woman and her grandfather visiting all 30 major league baseball parks (with stops for to-go coffee, boxes of donuts, poster boards, programs and paper entrance tickets), and a desert-dwelling, ocean-loving girl creating her own marine biome out of paper products with jellyfish mobiles and cardboard box submarines, reading books about fish and reports about whales and getting the gift of a trip to California (paper train tickets, in a box) to see the real thing.

The video ads will run on television and in pre-roll on digital sites, while the print ads will appear in 12 major publications, Hansan says. The P+PB is also planning a partnership with amazon.com, in which ads will appear on the sites and on the confirmation receipts people may print out. A back-to-school public relations campaign will also feature information about higher retention rates when paper — rather than digital — school products are employed.

Although P+PB member companies have undertaken their own awareness campaigns in the past, this is the first effort from the board itself. The board will spend about $25 million a year for the next six years on awareness efforts, Hansan says.