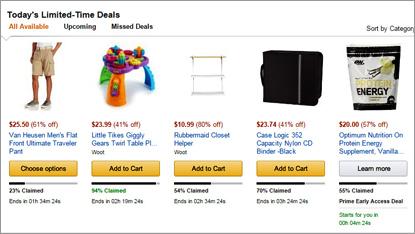 Shoppers might feel frustrated with the way Amazon continues to handle the made-up holiday Prime Day, but the disappointment doesn't show in the click numbers shifting purchases to the marketplace and away from Google.

Amazon Prime Day online deals are offered only to consumer members of its Prime service, but the company offered a three-day trial hopefully to sign on new members.

Reflektion CMO Kurt Heinemann, thinks some of the disappointment might come from Amazon selling "a bunch of old inventory stock that's been piling up in their warehouse." While he calls it a day of "lost sales opportunity," Amazon said peak order rates surpassed 2014 Black Friday.

ChannelAdvisor ran same store sales numbers for Amazon at noon Thursday. Despite some negative consumer reaction to Prime Day on social media, CA saw interesting results. Amazon has been growing in the mid 20%, but on Wednesday around noon eastern same store sales numbers for Amazon Europe identifies a 40% growth rate, and in the United States Amazon that number jumped to 80%.

ChannelAdvisor confirmed the units sold reached Black Friday levels, as Amazon reported. Its customers achieved 97% of the sales on Prime Day, compared with their sales on Black Friday 2014 on a SSS basis.

In Google and Bing ad platforms, Vincodo saw search impressions and order conversion rates hold steady, but click rates on ads fell 10%.  "Our assumption is that searchers abandoned their search results and headed over to Amazon without clicking on paid search ads," said Tim Daly, CEO at Vincodo. "In the case of the referenced client day-over-day impressions were flat, but search partners saw a 27% increase in impressions."

Using Kenshoo for paid search tracking, the unnamed specialty apparel maker tracks steady daily impressions and click rates. "To see double digit drop in average CTR was shocking, as we never see that type of volatility for the client," Daly said, admitting he did the analysis to see the impact Amazon could have on Google. "Google dropped 14%, Bing dropped 11%."

Separately, Facebook follows with tests on its own "buy" button. The social network added a shopping experience, with product pages and instant check-out to some business pages. It makes each page a little shop. Brands insist that Facebook members don't come to the site to shop, but the button lets shopper instantly check out from within Facebook, instead of being directed to a third-party site.

Google made a move Thursday to add a "Buy" button to its Google Shopping marketplace on mobile in an effort to make it easier to make purchases. The move creates a marketplace similar to Amazon.