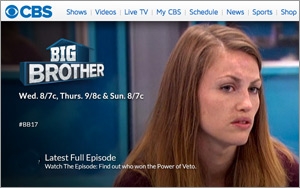 CBS was not immune to the current weak TV advertising marketplace -- slipping in its second-quarter advertising revenues results from the same period a year ago. But it has high hopes for next year.

CBS was 3% lower to $1.59 billion in advertising during the second three months of 2015 -- due to the timing of NCAA Men’s College Basketball Tournament as well as the sale of an Internet business to China.

“People want to buy a closer to when [a show] goes on,” says Moonves, which is why, he says, upfront volume was slightly down.

CBS made some sharp gains from its cable networks -- Showtime Networks, CBS Sports Network and Smithsonian Networks -- grew 19% to $615 million in revenue. Showtime had its best pay-per-view boxing event ever during the period with the Floyd Mayweather-Manny Pacquiao fight.

Local broadcasting slipped a bit in revenues $651 million from $665 million from a year ago. “We knew 2015 would be a challenge,” says Moonves. At the same time, he talked up a big 2016 for local TV stations -- especially with the sharply higher political ad spending estimated to climb $4.4 billion.