Broadcast political TV advertising will again grow for the 2015-2016 political season, which includes the presidential race. But in years to come, digital platforms will eat into its political advertising share.

Borrell Associates estimates that broadcast TV advertising will grow to $8.5 billion for the period July 2015 to November 2016 -- 52% of all political advertising dollars.

Just for 2016 alone, broadcast will see $6 billion in political advertising, up from around the $5.75 billion level in 2012 -- the last presidential election year.

But next year and the following years, Borrell expects broadcast TV to be severely impacted, dropping to $2 billion in 2017 and then to just under $4 billion in 2018 -- down from just under $5 billion level in a comparable year, 2014.

By the next presidential election in 2020, broadcast is forecast to only hit $5 billion. In that year, Borrell estimates digital platforms will pull in around $3.5 billion.

National political contests -- including that of the presidential race next year -- will amount to about half of the $16.5 billion to be spent between July 2015 and November 2016. Broadcast TV will account for $5.5 billion with cable TV pulling in $737 million. 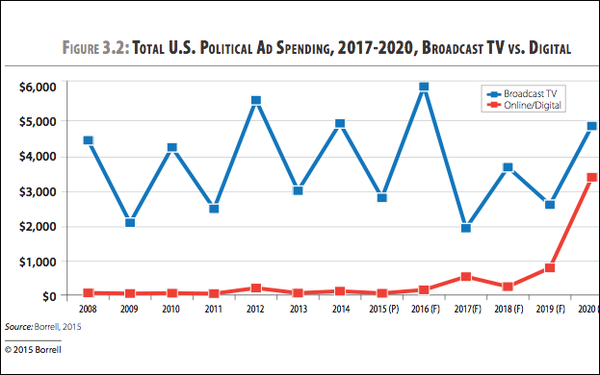