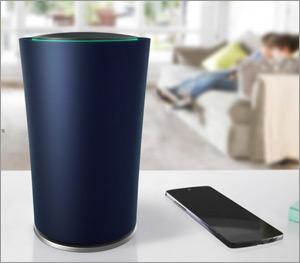 Google has partnered with TP-LINK to launch the home router OnHub, a different kind of device to keep search and display ads and YouTube videos serving up and playing without a glitch. It also operates on the protocol that Google designed to connect devices to the Internet.

The wireless OnHub, which looks similar in shape to Amazon Echo, communicates with an app on devices and continually improves on its own. Other than the shape, the two devices are very different.

The OnHub design replaces cords and blinking lights with internal antennas and useful signals in an effort to encourage consumers to keep it out in the open, rather than behind the chair, where it performs best.

An app for either iOS or Android tells the owner how many devices are connected to OnHub and the speeds they get. During the setup process, the router searches the airwaves and selects the best channel for the fastest connection. An antenna design and smart software works in the background, automatically adjusting OnHub to avoid interference to keep the network running at peak performance. Users can prioritize a device, so that the most important activity -- like streaming a favorite show -- gets the fastest speed, explains Trond Wuellner, group product manager at Google, in a post.

OnHub will become one of many hardware devices that consumers will see from Google, either by partnering with other companies or acquiring as it builds out its network of Internet of things devices. One feature in OnHub pulling together devices, a protocol Google calls Weave, the Android team's IoT communications layer that it announced at Google I/O. It also supports Thread, an IoT wireless protocol created by Google's Nest Labs and Samsung.