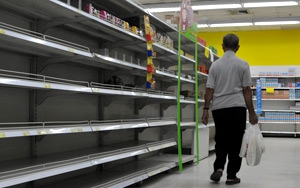 The study, Retailers and the Ghost Economy: The Haunting of Out-of-Stocks, from  IHL Group and OrderDynamics details many reasons why consumers could be disappointed this holiday season.

The findings do not analyze the inefficiencies created by a lack of technology to bridge the gap between online advertising and inventory replenishment systems, but programmatic technology would fix this break in the supply chain. Unfortunately, the industry seems far from connecting the process of serving online search advertisements with inventory control and manufacturing. While it's a completely different topic than the one talked about in the study, it's worth mentioning.

One point of contention remains an inability for ad servers to stop serving ads for products that have run out of stock. At one point, Kenshoo claimed its platform provides this feature, but programmatic would mean connecting the entire manufacturing pipeline, including product replenishment, based on internal flags and what-if statements in the code running the platform.

As for the study, three core areas define the Ghost Economy: cost of overstocks, out-of-stocks and sales returns, estimated at $471.9 billion, $634.1 billion, and $642.6 billion, respectively. The study defines "out-of-stocks" as any time the customer arrives at a store willing to make a purchase, but leaves empty-handed for any reason other than price. Asia-Pacific seems to have the most trouble with out-of-stocks. At $263.8 billion, they remain a core issue, based on a booming middle class, yet lack of refrigeration and spoilage, per the study. EMEA at $163.7 billion follows, with North America at $129.5 billion and LATAM at $77.1 billion.

Price mismatching also remains an issue. Some $74.1 billion is lost annually due to promotional systems not integrated with signs and pricing in stores. Here the barriers are often silos of information and lack of communication between systems. Although the study doesn't delve into this option, this is where integration systems to create programmatic supply chains would come in handy and reduce losses.

And $68.1 billion in annual losses comes from inventory systems identifying that the items are in stock, but employees can't find them -- a number worldwide that is equivalent to total revenue for Nordstrom, Meijer, Bed, Bath and Beyond, Office Depot, Taco Bell and Albertson's combined.

Imagine, retailers lose $120.8 billion in sales -- "equivalent to the annual revenues of McDonald's, Macy’s, Publix, and Best Buy" -- because customer can't find help in the store. Although this is very common in North America, it is not so common in the rest of the world, per the study. Yet even in North America, retailers lose more in sales than total sales for TJ Maxx due to inadequate staffing. Worldwide, the $120.8b is the equivalent to the annual revenues of McDonald’s, Macy’s, Publix, and Best Buy lost due to customers not finding help.

The extensive methodology for the report analyzes results from three primary research studies of retailers in various regions to understand how they measure and classify out-of-stocks and overstocks. They served as the baseline to measure the magnitude of each problem. The study also added consumer experiences, and the model takes into consideration differences in retail sales, sales density, rise of middle class, percentage of disposable income, and shopping experiences of consumers for perishable and non-perishable items, among other pertinent issues.