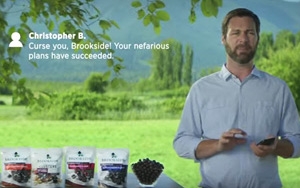 Brookside — the Hershey's brand that this month expanded beyond premium chocolate-covered snacks to include fruit and nut bars — is using TV as a key vehicle to spotlight the fan-love it generates on social media.

The integrated campaign, "Talk About Delicious," is based on the public enthusiasm of fans' comments and tweets, but also on research that confirms that consumers are unusually passionate about the brand once they try it, reports Brandy Woolford, associate manager, brand PR and consumer engagement for The Hershey Company.

The TV spots and videos feature Jon Dore, a Canadian comedian and actor with a likable, regular-guy manner, reading and playfully responding to real fans' social comments about the products. As he does so, the fan comments also appear on-screen.

The fan comments in the first 15-second spot, "Read All About It," include "I would liquify it and bathe in it" and "Curse you, Brookside Chocolate! Your nefarious plans have succeeded." Dore's reaction to the latter: "Nefarious? Are we still talking about chocolate?"

In another twist, each time that the anchor "Read All About It" 15-second spot just described airs, it's being paired with one of three other 15-second spots that are variations on the same basic creative tack: "Very Big Bag," "Turtleneck Save" or "Emojis."

The TV ads, which will run on cable and network television through the end of the year and into 2016, will also be featured on the brand's site and its social media channels — along with two other Dore videos that won't air on TV ("Ambassador Prom Queen" and "Haiku").

The hashtag #talkaboutdelicious is being used in the brand's discussion with fans on its social media channels, to drive awareness of the ads and videos. But the hashtag is conspicuously absent (to a marketer's eye) from the TV spots.

Reason? "At this time, we want our TV spots to focus on simple brand messaging that links the brand to how delicious the products are, without using a specific call to action [like the hashtag]," Woolford tells Marketing Daily. "The hashtag is leveraged in our digital components, and as our brand matures and the campaign continues to evolve, it will be leveraged in other capacities and channels, as well."

The branding campaign — which will also help support Brookside's December addition of a new flavor to its Crunchy Clusters line (launched a year ago) — will likely expand to other media in late 2015 and 2016, according to Woolford..

The Hershey Company acquired Brookside Foods Ltd. in 2011 from private owners who founded Brookside Farms in British Columbia in 1954. The brand's last advertising campaign was launched in January 2013.