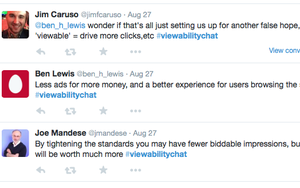 The chat featured questions asked by Varick Media Management, with a handful of industry players -- including Jim Caruso of Varick and Ben Lewis of AppNexus -- participating.

There are too many tweet-answers to all of those questions to fit into this space -- you’re best off just viewing the whole viewability chat string -- but the participants made some interesting points. Notably, the participants were in agreement that a viewability standard needs to be agreed upon and that quick fixes to viewability rates could lead to troubles down the road.

“By tightening the standards you may have fewer biddable impressions,” acknowledged Mandese, ”but they will be worth much more.”

Caruso responded by saying, “Initially they will be wroth more, but [I] wonder if that’s sustainable if it doesn’t drive dramatic increase in ROI.”

The “better user experience” topic was brought up at the recent Programmatic Insider Summit in Tahoe, Calif., where panelists debated whether or not some publishers -- which went unnamed -- were hurting themselves by optimizing only for viewability. This approach results in Web pages that bombard users with ads.

This might be a short-term fix that leads to even more long-term problems. Right now, publishers are incentivized to rearrange ad placements to get better viewability rates because that’s what marketers are willing to pay for. But what unintended consequences are lurking?