Online gaming network Machinima violated laws against deceptive advertising by secretly paying video bloggers to tout the Xbox One, the Federal Trade Commission said in a complaint unveiled on Wednesday.

The allegations stem from a November 2013 campaign for Microsoft's XBox One and three new games -- "Forza 5," "Dead Rising 3" and "Ryse: Son of Rome."

Starcom MediaVest Group hired Machinima to promote Microsoft's Xbox and the new games, according to the FTC. Machinima allegedly promised Starcom MediaVest that the commissioned video ads would be viewed at least 19 million times.

The FTC did not bring charges against Starcom or Microsoft.

According to the FTC, Machinima paid one well-known gamer $30,000 to post two video reviews of Xbox One and the game "Ryse" to Machinima's YouTube network. A second gamer was allegedly paid $15,000 for posting two video reviews.

None of those clips, which garnered more than 1.6 million views total, indicated they were created as part of a promotional initiative, according to the FTC.

For the second phase of the campaign, Machinima allegedly recruited influencers to post clips promoting Xbox One and the new games. The company told the uploaders that videos couldn't include anything negative about the agency, Xbox One or the new games. People who posted clips were paid up to $25,000 each, depending on the number of views their clips garnered.

News of the enforcement action comes three months after the FTC reiterated in an update to its endorsement guides that marketers must "clearly and conspicuously" disclose any material connections between themselves and endorsers.

Machinima agreed to settle the charges by vowing to ensure that any influencers it pays in the future will disclose that they were compensated. The company didn't admit wrongdoing in the case.

A representative of the game network said in an emailed statement that the ad campaign occurred prior to its March 2014 change of management. "Machinima is actively and deeply committed to ensuring transparency with all of its social influencer campaigns," the representative stated.

The FTC didn't accuse Starcom or Microsoft of violating any laws or regulations, noting that the companies "took swift action to require that Machinima insert disclosures into the campaign videos once they learned that Machinima had paid the influencer and that no disclosures had been made."

Charles Harwood, regional director of the FTC's Northwest Region, added in a letter to Starcom and Microsoft that the failures to disclose "appear to be isolated incidents that occurred in spite of, and not in the absence of, policies and procedures designed to prevent such lapses."

He wrote: "Since the Xbox One campaign, Microsoft and Starcom have adopted additional safeguards regarding sponsored endorsements, and they have committed to, among other steps, specifically requiring their employees to monitor influencer campaigns conducted by subcontractors in the future."

A Microsoft spokesperson said the company is "pleased that the FTC recognized Microsoft has vigorous compliance processes and procedures for sponsored campaigns.”

Starcom MediaVest said in an emailed statement that it "has operational safeguards in place for programs like these" and "cooperated fully with the FTC and took quick action to address this isolated incident.” 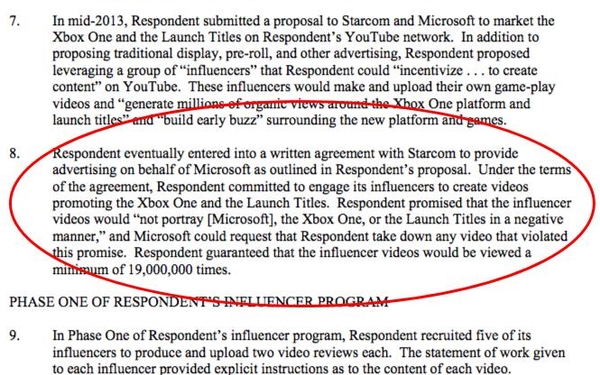