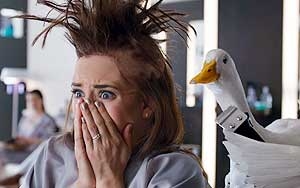 That’s according to a national survey commissioned by Aflac to understand consumers' perceptions of corporate social responsibility programs.

Millennials (69%) and parents (71%) ranked CSR as a top priority with regard to their willingness to engage on a company’s social media channels compared to non-Millennials (46%) and non-parents (40%).

Millennials and parents (both 62%) believe companies are trustworthy in their philanthropic efforts on social media, compared to non-Millennials and non-parents who responded at (40%) and (34%), respectively.

“We understand that Millennials are a growing force in the marketplace, with that generation now standing at roughly 80 million strong, with a $200 billion purchasing power,” Blades tells Marketing Daily. “Millennials are very philanthropic-minded, and CSR has a significant impact on their buying and investing decisions.”

When a company is looking to raise donations on social media, Millennials are more likely to engage with video content, according to the survey.

Aflac has a strong presence in social media, including the Aflac Duck’s Facebook page that has more than 700,000 followers.

“Our survey shows that Facebook remains the most impactful social medium for influencing people in the areas of CSR and philanthropy, so we will continue our robust social media marketing as well,” Blades says.

“This is important to Aflac as our primary philanthropic cause is children’s cancer,” Blades says. “In fact, we recently announced that, due largely to the generosity of our independent sales agents who donate every month from their commission checks, we have exceeded $100 million in donations to the treatment and research of childhood cancer.”

Other significant findings include: People with children are more likely to donate 10% of their salary to charity than those without children.

Forty-nine percent of Millennials would rather live modestly and donate a large portion of their yearly income to a cause that has impacted them, whereas only 36% of people 35 and older would. And 66% of Millennials are likely to invest in a company well-known for its corporate social responsibility program, whereas only 48% of those 35 and older would.

Research findings are based on a survey fielded in the United States between Aug. 18 and Sept. 2. For this survey, 6,000 respondents (2,000 nationally representative, and 400 within each of the top 10 DMAs) were asked about their thoughts regarding various aspects of corporate social responsibility. The study also surveyed 355 investment professionals about how corporate social responsibility impacts their decisions. The survey was completed through GMI’s Global Test Market double opted-in panelists who have registered to participate in online surveys.