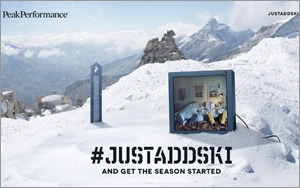 The concept encourages people to submit photos that add skiing to their normal lives to the hashtag #justaddski. For instance, one submission shows people fully dressed in their winter gear while on a mountain with little snow. Another image shows a little boy fully dressed inside a retail shop. Consumers who submit images will earn the chance to win premium items from the new Peak Performance Ski Collection, with additional prizes becoming available throughout the season.

“Half the fun of the ski season is anticipating each outing. We wanted to celebrate that anticipation and get consumers to show the world just how much they were looking forward to hitting the slopes,” said Philip Arvidson at Perfect Fools. “With each photo powering a fresh snowfall from our snow cannon we are literally bringing the start of the ski season forward,” says Philip Arvidson at Perfect Fools.

In addition, each photo uploaded will become part of a digital tracker that will help charge up a snow machine at the Hintertux Glacier at Zillertal in Austria. The more pictures uploaded, the more snow it will produce, according to the agency.

The campaign will appear via all Peak Performance social channels, in retail and among partners and distributors worldwide, supported by PR targeted at sports and fashion press as well as targeted pre-rolls and digital banners.