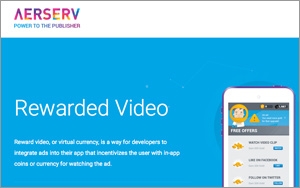 All across the industry, companies are seeing demand for mobile video supply increasing. Globally, online video ads are expected to grow by 22% this year, and an additional 19% in 2016 according to Carat.

AerServ CEO Josh Speyer says that there is ample supply to meet the demand for quality mobile video inventory, ibut it’s hard for suppliers and publishers to get connected. “Part of it is going to the providers and surfacing their inventory to the places people are buying,” he says.

Additionally, everyone wants premium inventory, which can be hard to find. “It’s not that there’s no organic produce in the world, it’s that it’s not all available at Costco,” he adds.

Established SSPs including AppNexus, PubMatic, Smaato among others have partnered with AerServ to help resolve that problem.