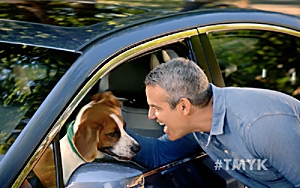 Subaru is bringing its “love” mantra to NBCUniversal via a co-sponsored promotion of the media company’s “The More You Know” 26-year-old philanthropic PSA platform in which the network's roster of stars offer brief encomia for community action on diversity, health and the environment. Subaru is the very first brand partner of the program, which will serve up a co-branded philanthropic message across NBCU properties, both broadcast and digital.

The effort ties in with Subaru's “love” mantra, and its brand equity around having socially conscious “bumper-sticker” owners. Said Alan Bethke, VP, marketing at Subaru of America, in a statement: “Subaru prioritizes working with like-minded partners that inspire action, guided by a shared vision and core values.” On the “The More You Know” site's splash page, Subaru's presence is subtle; a tab takes visitors to a Subaru-branded page featuring the videos.

The first of the five public service announcements features Bravo star Andy Cohen and his dog. In the ad, he exhorts people to give back to the community, including pet adoption. The ad touts the “Subaru Loves Pets” plank of the automaker's philanthropic platform. Subsequent PSAs and content released over the next year will highlight four additional areas of shared importance -- environment, education, community improvement and health, per the company.

In addition to “The More You Know” on-air vignettes made possible by Subaru, which will run across the NBCUniversal portfolio, messaging around the Subaru Love Promise also will extend to the company’s digital properties, including social media platforms and a custom website.

“The More You Know” PSAs, which run during prime-time, late night spots and on Saturday mornings, have also featured Presidents Barack Obama, Bill Clinton and George H. W. Bush. NBCU's effort isn't unique. CBS's program, “CBS Cares,” which launched in 2000, focuses on health and social issues, and whose media commitment represents about $200 million, per the company. Disney/ABC's platform, “Be Inspired,” involves partnerships with different organizations, often by such pro-social calendar events as Earth Month, and Foster Care Awareness Month. NBCU’s campaign is the only one of these that has a co-branded partnership.