Doodle 4 Google Wants To Know What Makes You Unique 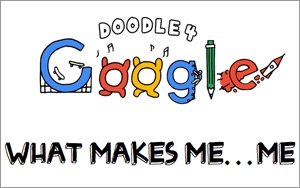 Google is looking for the next winner of the "Doodle 4 Google" competition, so on Monday it began inviting students in kindergarten through 12th grade to create a Google Doodle based on the theme “What Makes Me…Me.”

Now in its eighth year, Google says it will allow students to work within any medium they choose, as long as they incorporate the letters that spell Google.

The 2015 Doodle 4 Google competition will award one winner a $30,000 college scholarship, the chance to meet with the Google team, and will feature their winning Doodle on Google’s home page for a day. The winner’s school will receive $50,000 to spend on technology.

The judges will select finalists from each state, with public voting to begin Feb. 22, 2016. The national winner will be announced March 28, 2016.

Audrey Azhang, who was 11 years old at the time, won last year's contest.