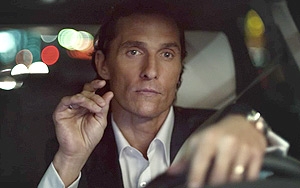 In case readers haven't been paying attention during “Colbert” station breaks, McConaughey has moved uptown, driving Lincolns to all-night poker parties with mysterious people in the hills overlooking L.A. The campaign is also about those people, all of them meant to evince somewhat eccentric success and affluence.

The new ads carry the theme “The Feeling Stays With You” and the ads are directed by filmmaker Gus Van Sant. The other characters in the ads are examined in online video content.

But how is that playing this time around? Well, it is having a salubrious influence on brand perception, but not much on purchase consideration, and the awareness jolt is wearing off. That is according to daily brand perception research firm YouGov BrandIndex.

The firm polled 30,000 adults 18 and over who are actually in market, as they plan to buy a car within the next 12 months. The company said that last year’s inaugural campaign with the actor tripled consumer perception based on the question, “If you've heard anything about the brand in the last two weeks, through advertising, news or word of mouth, was it positive or negative?" It has done likewise this year, but while ad awareness last year jumped from 18% to 31% of potential auto buyers reporting they were aware of the ads by Oct. 19, this time Lincoln swung from ad awareness levels of 17% to 25%, and for the moment, that number seems to be the plateau.

Ted Marzilli, CEO of BrandIndex says part of last year's boost in awareness for Lincoln could have been fueled by a raft of humorous skits surrounding the then-new campaign. "That probably magnified the effect more than the campaign alone would have. I just don't think you are getting much of that the second time around."

YouGov BrandIndex’s measurement last year of purchase consideration for Lincoln went from 6% of potential car buyers considering a Lincoln for their next auto purchase to 9%, although that wasn’t the high mark for the brand in 2014. This year? The campaign hasn't budged consideration above 7%. Marzilli tells Marketing Daily that consideration is key. "The ads may be stylish, but are they having the desired effect? That's the question. Are people going into Lincoln showrooms? if you were to build consideration you would think it would translate into more sales."

He says the issue is that even if consideration improves, the automaker's improved position may not lift it to a region in which it is high enough on the list to close deals. In other words, consideration can be up, and sales can remain flat. The good news is that Lincoln actually did post some good sales numbers last month: the Ford Motor luxury brand posted its best sales in four years, with volume up about 20%, which was driven by the MKZ sedan.

In September, the automaker ran a campaign to promote the MKX’ 360-degree camera by bringing artists to White Sands National Park in New Mexico. They took pictures, made films and even wrote surrealistic poetry that was intended as a metaphor for different viewpoints of one thing, à la the camera system.