After I’ve interviewed somebody pretty obnoxious, and conveyed that in print, I often get a note from the cretin, cheerily observing, “Hey, as long as you spell my name right!” (And really, very often I do!)

It must be something like that for presidential candidates. If they’re being talked about, that means voters aren't talking about somebody else. At the primary level, a lot of them are not as well known as they think they are (Lincoln Chafee) or considered presidential timber (take your pick there).

For this political season Zefr, whose massive data mine calculates who is watching, talking or commenting on YouTube sites and matches that with advertisers’ products, is doing that for the men and women running for president.

Makes sense.They are merchandised the same way, and Zefr is already in the business, helping brands ID (with a thing called Brand ID) find who, where and what YouTube videos are being uploaded or watched.  When YouTube released a chart of the top viewed YouTube ads ever, Zefr created a list based on comments and on parodies and response videos, being that mockery or mimicry entails quite a bit of engagement.

In the presidential race, for the week of Oct.19-25th, not surprisingly, (The) Donald Trump videos had 28 million views and 483,000 engagements, more than anybody. In this case an engagement means likes, dislikes and comments and there are some revealing stats there, which I’ll get to below.

For all candidates, "views" include parodies and harangues, which for all of the candidates, but probably particularly for Trump, is quite a big catalog.

Trump videos have had the most views for 10 of the 11 weeks Zefr has been watching. The full weekly list is below.

You can tell a bit about the passions of the people. Hillary Clinton’s videos had 21 million views, which at least puts her in the Trump ballpark. But her engagements for the week were far fewer, just 236,000.

Carly Fiorina, who may have had at least half of her allotted 15 minutes, would seem to be a lot less popular on YouTube now than she seemed to be among political circles just a few weeks back. But Zefr says since they began tracking 11 weeks ago, her views have grown 35%.

One of the things about YouTube videos is that popularity, or topicality, wanes and spikes.

The week after Larry David impersonated Bernie Sanders on “Saturday Night Live,” the Vermont socialist candidate’s official channel was hotter than anybody else’s, gaining 494,000 new views according to these Zefr stats.

And all Bernie Sanders’ videos made him the most-viewed candidate with 14 million views--the only week Trump was trumped.

The Zefr data does create false conclusions, probably, unless you are very firmly in the “spell my name right” camp. For example, 43% of the Donald Trump-themed videos are negative, 32% are neutral and just 25% are positive.

Tonight’s Republican debate provides new fodder for everybody, including, or maybe especially YouTube. May the best person just not make a damn fool out of themselves. That’s about all we can hope for.

(The list on this page is republished courtesy of Zefr.) 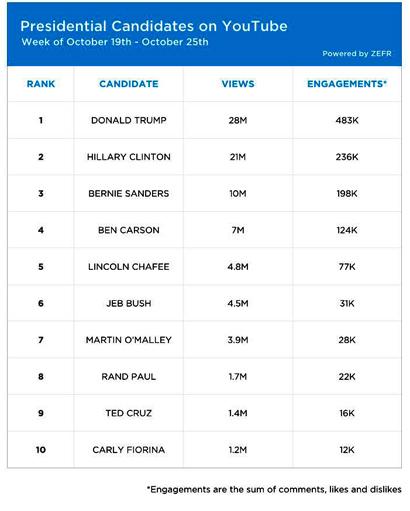