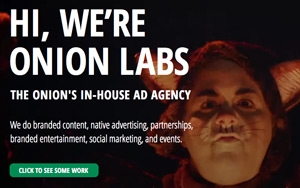 The partnership is kicking off with a new ad campaign created by Onion Labs for multiple technology advertisers, including Dell, HP, Intel, Lenovo, and Microsoft, targeting millennial consumers with ads promoting PCs.

The tech companies are coming together to promote desktop and laptop computers as they face growing competition from smartphones and tablets.

The campaign consists of a nine-part video series titled “Help! I’m Turning Into My Parents!” starring "Saturday Night Live" regular Kenan Thompson as Dr. Jimm, a self-help guru in the style of Dr. Phil who helps his guests avoid the technophobia that afflicts their parents.

In March of this year, Onion president Mike McAvoy, who replaced longtime CEO Steve Hannah in June, revealed that branded content produced by Onion Labs contributes around four-fifths of the publisher’s total revenues. For comparison, that puts it ahead of native ad pioneer Forbes, which derives around 35% of its total ad revenues from native, and on a par with BuzzFeed, which also gets the majority of its ad revenues from native.

On the editorial side, Onion, Inc. recently introduced a new snark-filled sister site, “StarWipe,” devoted to satirical celebrity gossip. Like its click-bait sibling Clickhole, StarWipe skewers the lamentable practices of an execrable online publishing category by outdoing them. A current example: “People Walking Out of Al Pacino’s Broadway Show, Probably For A Slice of Real New York Pizza.”