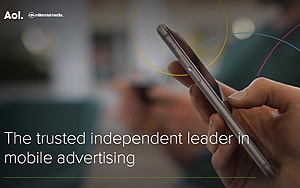 Rentrak and Millennial Media are launching a new product where advertisers can retarget TV commercials to mobile devices.

With the new product, the companies say marketers can measure results to see their specific return on investment. They can also secure “share of voice” data from Rentrak, the TV/media research company, and Millennial Media, the mobile advertising company.

In a blog from Andrew Abbott, senior director, global mobile video sales at Millennial Media (now part of AOL), he says after Rentrak aggregates data across various cable and satellite providers, it then “passes digital audiences based on commercial viewership to Millennial Media’s DMP.”

Millennial Media will then anonymously match Rentrak’s audiences with users on smartphones and tablets, “and can serve a mobile video ad to that cross-screen audience.”

Abbott adds that “the retargeted mobile ad is served after the initial TV ad is viewed, providing an additional opportunity for sequential messaging and brand re-engagement.”

He says advertisers can choose to re-target consumers that have seen their previous TV ads, or even put their digital video ads in front of people who’ve seen competitors’ ads, which can be measured by Millennial Media.

Recently, Rentrak was acquired by digital media researcher comScore in a $830 million dollar deal announced in late September. Millennial Media was bought by AOL earlier that month, a deal valued at $238 million.