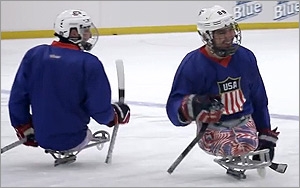 The beer company has been a partner of USA Hockey for over a decade. This year, the brand elevated its commitment to the sport by helping make the game accessible to more people. Sled hockey provides amputees and athletes with disabilities the chance to play.

The initiative includes a $250,000 investment that is helping fund 10 adult sled hockey programs. Labatt teamed up with Resource/Ammirati New York to raise awareness with a national campaign, themed “Pass it Forward.”

The campaign is airing nationally on NBC, NBC Sports and the NHL network. The campaign also features a Web site hub and social campaign encouraging fans to learn more about the cause and to "give the gift of the game." Labatt is releasing limited edition USA Hockey Sled Hockey cans in November and December.

Both PSA-style TV spots were directed by Vincent Lin of Valiant Pictures. The goal is to raise awareness for sled hockey and creating more access for players.

“Labatt has had a partnership with USA Hockey for more than 12 years and as we began to dig deeper into their sled hockey program, we quickly learned that access was one of the major barriers for players,” says Lisa Texido, Labatt brand manager, in a release. “Hockey is part of Labatt’s roots — it has been for decades — and we believe we’re in a position to help drive and grow the sport of sled hockey in a big way. We can create more programs and bring greater awareness and access to the sport, nationally. And that’s exactly what we’re going to do.”

Sled hockey, or sledge hockey as it is known outside the United States, is played by people with physical disabilities in the lower part of the body. The game follows similar rules to ice hockey, with players competing in specially designed sleds affixed with two ice hockey skate blades. Each player is equipped with two hockey sticks bearing metal pics on the ends so players can propel themselves and move across the ice. It is an extremely physical, grueling sport that its many athletes view as a game-changing experience, both on and off the ice.

Back in April, in partnership with USA Hockey and Buccigross, Labatt unveiled its initiative to sponsor and create more access for players. The announcement was made just before the 2015 IPC Ice Sled Hockey World Championships in Buffalo, New York, which is where Lin captured his source footage for the "Pass It Forward" campaign spots.

"I didn't know what I would capture going into it -- that's the scariest and best part of documentary filmmaking,” Lin says in a release. “In interacting with the players and hearing their inspiring individual stories and their dedication to teamwork and family, the story really became about their commitment and love for the game.” The USA team won the championship game.