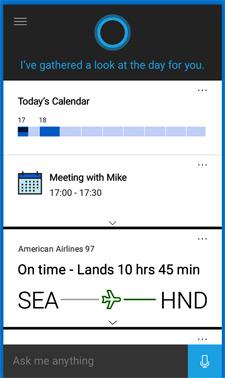 Making the ability to search for information on smartphones just at little bit easier, Microsoft brought the virtual assistant Cortana to select iPhone-, Android- and Cyanogen-powered devices as a companion app to any PC running Windows 10.

After several months in beta, the Cortana app comes with the same intelligence as Cortana on the PC, with the ability to search for information and give helpful suggestions on the go.

Integrated with Bing technology, the tool enables users to set a location-based reminder on one device and have it pop up on the smartphone when they arrive at the location.

Similar to Google Now, the tool also tracks flights, packages and more. However, using Cortana on both the phone and the PC allows the user to get updates on both devices.

Microsoft says Cortana can toggle settings or opening apps, with hands-free search, assistance to get directions, find a local restaurant or enter a calendar reminder. The Phone Companion app on the Windows 10 PC will help users install the Cortana app from the Google Play or Apple App Store onto the phone.

For now, the Cortana app is only available in the U.S. and in China on devices running iOS 8 or Android 4.1.2, at the very least, to run the Cortana apps.