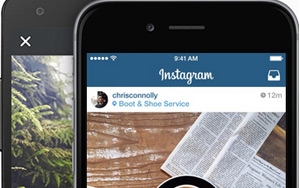 For better or worse, consumers seem to be remembering the ads they encounter on Instagram at a remarkable rate. In fact, according to fresh analysis of Nielsen Brand Effect data, the social network is seeing average ad-recall rates of 18 points -- 2.8 times higher than Nielsen norms for online advertising.

The numbers were gleaned from around 700 of Instagram’s more popular ad campaigns from September to November of this year.

Among other happy brands, Sony Pictures was recently able to reach 23% more people in its target segment -- those who might have an interest in the new thriller "The Perfect Guy" -- by adding Instagram to the existing Facebook placements.

Sony Pictures’ creative team also produced a video cut specifically for the Instagram platform in the square aspect ratio, and is now considering using this type of creative on both Facebook and Instagram in order to improve the ease of executing across both platforms.

As such, Instagram is assuming an ever larger share of Facebook’s total ad revenue. The network’s global mobile ad revenues will reach $2.81 billion -- or about 10% of Facebook's global ad revenues -- by 2017, according to a recent eMarketer forecast.

Marketers clearly appreciate the offerings. This year, 32.3% of U.S. companies with 100 employees or more will use Instagram for marketing activities, according to recent findings from eMarketer.