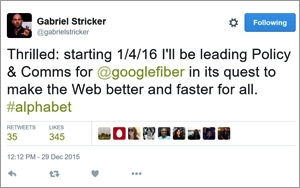 Stricker held the position of director of global communications and public affairs at Google, but left in April 2012, to head up Twitter's communications policy. He left Twitter in July 2015 when cofounder Jack Dorsey returned as CEO.

Moves like this continue to light a fire under the feet of competitors. Earlier this week Comcast announced its next-generation technology that will deliver gigabit Internet speeds. The company touted that it has installed what it believes is the “world’s first DOCSIS 3.1 modem on a customer-facing network” at a home in the Philadelphia area.

While some Comcast users can already purchase gigabit service, this process involves less groundwork. It doesn’t require digging up streets or backyards.

"This technology, when combined with the extensive upgrades we have already completed on our advanced Hybrid Fiber-Coaxial network, will provide more gigabit choices for our customers,” wrote Tony Werner, the company’s EVP and CTO, in a blog post.