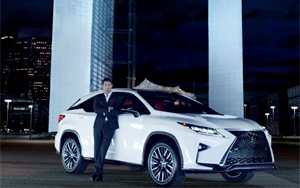 Lexus is promoting its revamped 2016 RX crossover with a marketing campaign that aims to reach a diverse audience. While anchored by two national TV spots, it also has three ads for, respectively, Hispanic, African-American, and LGBT consumers. The campaign also features some unusual music from Devo’s founder, and partnerships with AOL, “The Mindy Project” on Hulu, and a social component on Facebook and Instagram.

The effort includes two national TV spots focused on the vehicle’s design and performance. One shows a sophisticated woman walking past European landmarks. Cut to a man driving the RX past the city’s architecture. They meet up, finally, kiss, and drive away in the RX. The second ad continues the story, with the woman driving the RX hybrid through daytime city streets are intercut with shots of the man driving the performance-focused RX F Sport. Voiceover: “Never has luxury been this expressive.” Lexus says the music for the first spot is by Mutato, which was founded by Devo’s Mark Mothersbaugh. The second spot uses a song from 80s band Pylon. And there’s behind-the-scenes video, as well.

The ads will run on broadcast, digital, print and out-of-home media, per Lexus, which says the TV spots will air during prime time, late night, cable and sports programming, with properties such as NCAA Basketball on CBS, English Premier League on NBC, and the NHL on NBC and DirecTV Center Ice.

Brian Bolain, Lexus corporate marketing communications and product marketing manager, tells Marketing Daily that partnering with Kaling was "An opportunity to stretch our target audience. 'The Mindy Project' allows us to do exactly that, reaching a slightly younger, yet very highly engaged, demographic."

Team One Associate Creative Director Ryan DiDonato tells Marketing Daily that the agency wanted to find a musical direction that would complement both the sophistication and the edge of the visuals, “Both Mutato and Pylon embody the spirit of that juxtaposition and helped in elevating the national spots to a new dimension through two unique sounds that feel like a cohesive unit.”

Multicultural aspects of the campaign include a spot for an African-American audience, in which a modern couple start their day in an upscale, futuristic home, and drive off in the RX. An Hispanic audience spot is a fantasy in which a man wakes up in a desert to find a Lexus RX key fob in his hand. He enters the vehicle and drives through a dreamlike mountain pass. A woman appears as he drives by and gets in.

The third diversity spot is for an LGBT audience, with a couple start their day in their avant-garde home as one man grabs his briefcase and walks outside to his new RX. All of the ads focus on the vehicles new design.  Bolain says that, besides AOR Team One handling national ads, the campaign also brings in Lexus' diversity agency Walton Isaacson, who created three of the ground-up multicultural spots.

He tells Marketing Daily that another agency partner, the IW Group, is using transcreation to generate spots in various Asian languages, including Mandarin and Korean. These will also run in local market broadcast as well as digital outlets focusing on the respective target audiences. The ad for African American consumers will run on BET and TVONE with major coverage during evening, late night and prime time, with additional coverage dedicated to special programming, including BET Honors. The launch will also be supported through national print ads in a mix of lifestyle publications.

And, per Bolain, the Hispanic spot will run on Univision, Telemundo and Mundo Fox, including during programming such as Nuestra Belleza Latina, El Gran Hermano and Premio Lo Nuestro. The campaign will also be supported by national Hispanic print coverage. LGBT advertising partners include Passport Magazine, GayCities, Towleroad, The Advocate, OUT Magazine, FourTwoNine Magazine and Metrosource.

Lexus says print media features the headline “Sophistication. Sharpened.” and includes a first-ever placement for RX — a six-page gatefold —in this year’s version of the Sports Illustrated Swimsuit Edition. There are also placements in lifestyle and fashion titles such as Bicycling, Sports Illustrated, W and Vogue.

On the social media side of the equation, Lexus has partnered with Facebook to create custom mobile experiences that are thematically relevant to the user’s recent life events as reflected in changes in their Facebook status. The units feature custom video vignettes, photo galleries, and the Lexus TV spot all within the mobile Facebook environment.  The Signal, Lexus’ Tumblr page, continues the story introduced in the “Beautiful Contrast” spot. A series of images, animations and typography further demonstrates the provocative design and performance of the new RX and offers a behind-the-scenes look at the campaign.