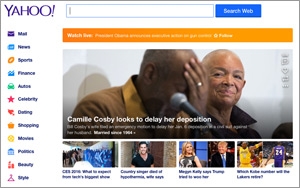 Yahoo has closed down Yahoo Screen, its effort to compete with Netflix and Hulu. The service pulled in premium TV and video, with its most notable acquisition the revival of NBC comedy “Community,” which had been cancelled by the network.

Overall, the 2-year-old service claimed more than 1,000 hours of programming as well as a partnership with Viacom and MTV when it started up in 2013. It also launched with eight short-form original series.

Yahoo made an aggressive investment to acquire content, including “Saturday Night Live” episodes and NFL video, as well as Katie Couric reports shown on the service.

Couric was hired as a Yahoo news anchor. Her daily news reports will remain available on Yahoo's main site.

In addition to “Community,” Yahoo had other original TV comedies, including “Sin City Saints” and “Other Space,” which can now be found in Yahoo’s TV section.

A Yahoo executive has said the company is constantly reviewing its products to create the best user experience -- and as a result, video content has been “transitioned from Yahoo Screen to our Digital Magazine properties.”