Penn Jillette At CES: Tipping The Scales For Smart Objects 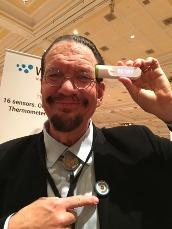 Before a so-called smart product takes off, it first has to get noticed.

At CES this week, with thousands of companies exhibiting and some 20,000 new products introduced, in a show scattered throughout all the major venues in Las Vegas, getting noticed is somewhat of a challenge.

But getting noticed by a big display at a major show isn’t the only way to gain attention.

Part of the equation also can involve being in the right place at the right time, which is true for so many other aspects of business.

And then along comes master illusionist Penn Jillette, of Penn and Teller fame.

Jillette found himself somewhat overweight, actually by more than 100 pounds.

I chatted a bit with Jillette at a pre-CES briefing, pondering the obvious question of where Penn Jillette fits into The Internet of Things.

Jillette said he was looking for a diet, something that would work to take off some serious pounds. He said a friend was up to speed on a lot of studies and would work with Jillette to get his weight off. But there was a big if involved.

His friend said he would work with him but that Jillette would have to find a way to accurately and consistently measure progress in detail and over time.

Jillette and his friend decided on using a WiFi scale and health tracker from Withings, an international company that focuses on connected devices around health.

When this started, Jillette and the company had no relationship with each other, according to both Jillette and Withings.

Jillette became so enamored with the tracking of his health through smart objects, that he got more connected devices.

When we met this week, Jillette wore an activity tracker and carried Withing’s new smart temporal thermometer, which he playfully demonstrated.

And just before heading to his Penn and Teller act in Las Vegas, Jillette hung out at the Withings exhibit as a testimonial to the success of his weight loss. As well as to the potential value of connected objects.