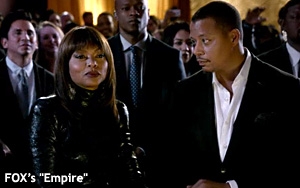 PASADENA, Calif. --- Struggles still abound at Fox, but there is some improvement, including longer-term advertising deals that include more time-shifted viewing.

Speaking at the Television Critics Association meeting, Gary Newman, chairman/CEO of Fox Television Group, says Fox had its most-watched fall in four years, but did not provide specifics.

Other viewing data suggests that Fox has lost some ground -- 4% -- although smaller declines than other networks. Fox’s season-to-date numbers average 2.5 million 18-49 viewers and 6 million overall viewers for the week ending January 10, looking mostly at Nielsen live program, plus seven days of time-shifting.

Fox was helped, in large part, by having the second season of “Empire” start in the fall. Its first year began in midseason 2015.

Concerning advertising, Newman says: “Conversations are improving quite a bit. We have sold a substantial amount of ad time on C7 [average commercial ratings plus seven days of time-shifting] this year.”

In addition, Newman said deals are still being made on C3. Many TV networks have been pushing to do more C7 deals rather than C3. “So there general correction in recognizing the delayed viewing is part of the contemporary experience.”

For the future, Newman hopes to get make more promotional brand tie-ins with advertisers. For example, Pepsi made a big splash with branded entertainment deal in “Empire”.

Although some shows continue to lag in live-plus-same day viewing, Fox remains hopeful -- especially when looking at some younger-skewing shows. Fox example, “Scream Queens” had initial low live-plus-same day ratings. But 30% of its viewing is live; 26% via DVR time-shifting; and 44% on video-on demand, Hulu, and the Fox Now app.

Overall, Newman says “62% watch outside the live-plus-same day period. These are very meaningful numbers. It’s helping us grow our Fox Now app.” This is especially true the audience is not only young but young and upscale. “Scream Queens” will get a second season on Fox.

In addition, the new ”X-Files” series will launch right after the NFC Championship game on January 24. Later on in the year, new show “Lucifer” will launch after an episode “X-Files.” Newman also says Fox’s live musical, “Grease Live,” will be use to start up another new top regarded series.