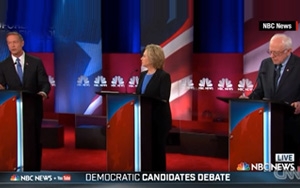 The best results for the Democratic Presidential debate so far are with CNN, which posted 15.3 million last October. The most recent Republican Presidential Debate, last Thursday on the Fox Business Network cable channel, earned 11.0 million.

Overall, the Republican Presidential debates have drawn the largest TV audiences on average --- with some of highest totals on the Fox News Channel, over 24 million viewers, and CNN, 22 million last fall.

NBC says 1.2 million viewers streamed the debate on a number of platforms, and another 552,000 watched the rerun of the debate on NBC news cable channel, MSNBC.