Adidas Is 'Here To Create' With New Global Push 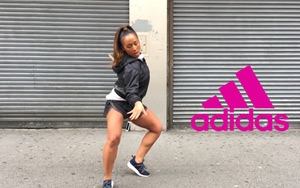 The campaign, via 72andSunny, extends the brand’s global three-year “Create” strategy that kicked off last year. With an insouciant “selfie” feel, the films are a melange of quick-paced professional footage and shots that look like they could have been taken with the athletes’ phones. With their disarming humor and jaunty playfulness, the films veer sharply from the species of jock hagiography — with a dollop of Ivan Drago — championed by brands like Under Armour.

Says Lia Vakoutis, Adidas’ senior director of global communications: “Our goal is to really focus on continuous rapid-fire creativity with strategically placed video on social, and TV. They are created as a diverse group of stories that can be seen as a collection.”

She tells Marketing Daily that the films are unscripted and some of the footage is from their own social channels. “This does a great job of bringing to life these stories in an authentic way.”

In Wozniacki’s film, the tennis player is fooling around and acting out with friends, instead of slamming serves and wearing a Duke Nukem game face. She talks about how creativity molds her playing. Parker’s story is as much about her child as herself, and the footage is almost all focused on her working out, having fun, and playing hoops with her daughter, with only a glimpse of her playing a pro game. “My mom is a beast,” her daughter jokes. Winhoffer’s video cuts between shots of her sketching new routines and unconventional workouts, which she does in studios and on the street.

Digital versions of the 15- and 30-second spots for each athlete debuted online Thursday and will air in 50 countries during broadcasts of global-audience events like the UEFA Champions League, The Grammys, the BRIT Awards and the Oscars. Vakoutis says the China-market campaign will feature local athletes and influencers in that market.

The brand this year launched a line of laceless soccer cleats, the Ace16+ Purecontrol, and last week, the brand unveiled the Pure Boost X running shoe for women.