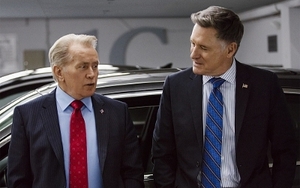 e their presidential roles in series of television spots for Chrysler from Portland-based Wieden+Kennedy.

The "Premium to the People" marketing campaign includes TV, print, online, social and digital extensions. It was timed to correspond to President’s Day. Additional television spots in campaign series featuring Sheen and Pullman will roll out.

The campaign's first two spots, "American-est" and "Swerve," feature both the Chrysler 200 and Chrysler 300.

The "Premium to the People" campaign was created in partnership with Bill Pullman returns to the big screen this summer as former President Thomas J. Whitmore in "Independence Day: Resurgence," opening nationwide in theaters on June 24.