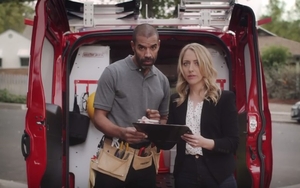 Fiat Chrysler Automobiles for the first time has created a social media-specific campaign focusing on its Ram Commercial ProMaster and ProMaster City brands.

The first two -- “The Bundle” and “Endless Turn” -- posted Feb. 18. The four remaining videos will be released in the coming months.

The approach provides a way for the brand to connect with commercial trade and small business owners who are inherently “mobile” as their vans are an essential tool of their business day, according to the company.

The sketch comedy-style Web series, inspired by real stories, demonstrates how much more practical, capable and efficient the new Ram ProMaster and ProMaster City would be for commercial customers and small business owners who may still be using older, impractical vans.

The webisodes feature comedians playing characters who fumble through everyday jobs because of the limitations of their non-Ram vehicles.

“The Bundle” demonstrates the ability of custom upfits and cargo capacity of the Ram ProMaster City. The first installer, in his poorly organized old van, struggles to find the right equipment in a mess of cables while an unidentified animal bites at his ankles. The client quickly realizes the mistake she has made, and calls out a different installer, whose organized Ram ProMaster van showcases his professionalism and expertise.

“Endless Turn” humorously showcases the ProMaster’s turning radius, class-exclusive front-wheel-drive and impressive 4,420-pound payload. The driver of the old van gets stuck in a narrow alley in his clunker van while the owner of the Ram ProMaster easily makes the turn and backs into the bay.

The web series was created by Dallas-based The Richards Group and was directed by Sergio Cilli, a Los Angeles-based director, performer and writer with strong ties to the city’s improvisation comedy community.