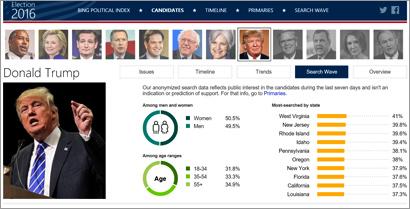 Heading into Super Tuesday, Microsoft Bing now shows voters a detailed breakdown of search volume for each candidate based on age, state, and gender to help voters better understand the landscape for Republican and Democratic hopefuls.

With Search Wave, voters now have the ability to search on Bing, using the data to become their own analyst by tracking insights on each candidate in real-time per state. The analysis tool, powered by Bing Predicts, uses anonymized and aggregate data and does not obtain or use any personal information in its reports. It measures volume, not sentiment, which counts as much as being popular. Being controversial or provocative may result in higher search volume.

Bing also released a new set of predictions for Super Tuesday, predicting outcomes for the 11 Primaries and Caucuses held for Democrats and Republicans.

Bing predicts Donald Trump to win almost all the Republican primaries and caucuses held on Tuesday. Ted Cruz is expected to win his home state of Texas.

Hillary Clinton is predicted to win 10 out of 11 states, with the exception of Vermont, Bernie Sanders' home state, which he is predicted to win. Bing predicts that Clinton will win Alabama, Arkansas, Georgia, Oklahoma, Tennessee, Texas and Virginia with more than 60% of the votes. She's expected to win Colorado, Massachusetts and Minnesota by a smaller margin, three states that showed Sanders to take until a couple of days ago.

The machine-learned predictive models use data from polls, prediction markets, and anonymized and aggregated search-engine queries plus social media posts to forecast the popular vote in each state, "rather than the candidate the delegates will eventually vote at the party’s national convention," per Bing.

Bing touts that in February it correctly predicted seven out of eight party primaries. For the Democratic Party Bing Predicts forecasted a victory for Clinton in Iowa and in Nevada, plus a win for Sanders in New Hampshire. For the GOP, Bing predicted Trump to win New Hampshire and South Carolina, but missed Cruz’s victory in Iowa.