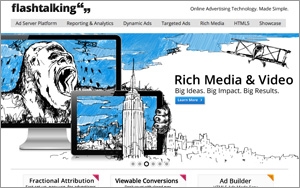 Months after acquiring German ad-tech company Device[9], Flashtalking is seeing an increase in attributed conversions that would otherwise fall outside the reach of cookie tracking.

Device[9], purchased in September 2015, looks beyond cookies to track a user across the mobile Web and mobile apps on a single device. The company's tech scans more than 50 non PII signals to produce a unique ID that can track user profiles across devices and browsers.

Flashtalking has been testing the tech out in beta with TUI Group, a German travel and tourism company.

Jos Pamboris, chief product officer, Flashtalking, said the point was to fill in gaps the company hasn't been able to in the past. Flashtalking wanted to provide TUI Group with information on how users got to its site -- not just how many people come from search, but also from prospecting campaigns, retargeting and other sources.

Traditionally, there are two main limitations for cookie tracking between mobile Web and apps, Pamboris said.

The first is that the cookie doesn’t always exist for purposes outside of advertising, he said, and in the majority of situations, you’re not able to track a specific cookie. Gaps are created when you can’t track an impression back to a conversion in the mobile Web.

And the second? Pamboris said any in-app environment is almost the equivalent of being a different device, since you can’t use the same cookie you've used on the mobile Web in apps. He compared it to desktop browsers -- there are different cookies for Chrome and Firefox.

In testing so far, the company is seeing an average 20% increase in attributed conversions from mobile-Web-specific inventory, Pamboris said. Additionally, there's been a 98% accuracy rate (based on tests conducted in web environments against approximately 8000 stable cookies) in recognizing users from mobile app impressions who convert on a mobile Web browser, and vice-versa.

Pamboris said there's a pain point in the market: market dollars aren't going into mobile at the same rate of media consumption. Now, he added, with the ability to measure mobile performance and provide data similar to that of desktop conversions, marketers are able to more fully understand different elements of a campaign.

What's next for Flashtalking? "For us, the next stage is being able to provide retargeting," Pamboris said, adding that will probably come a few months down the line.