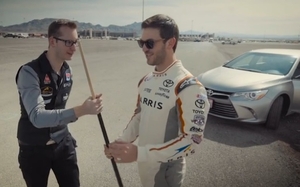 NASCAR is in the midst of a three-week marketing campaign to promote its annual 2,000-mile trek to Las Vegas, Phoenix and Los Angeles.

The program, which is largely digital and social focused, is geared toward a younger audience, according to Jill Gregory, NASCAR senior vice president of marketing and industry services.

“NASCAR fans love seeing their favorite drivers out of their element, having fun outside of the race car,” Gregory tells Marketing Daily.  “NASCAR Goes West is about capturing the adventurous spirit of our drivers during the annual trip to Las Vegas, Phoenix and Fontana, and bringing those unique stories straight to the fans.”

NASCAR fans can follow the drivers on their off-track adventures by visiting NASCAR Goes West Presented by Allegiant online at NASCAR.com/NASCARGoesWest, and on social media using #NASCARGoesWest.

YouTube personality and comedian Scooter Magruder was a special guest in Atlanta for the Folds of Honor Quiktrip 500, and helped launch "NASCAR Goes West" after the race from Victory Lane. It includes Scooter’s "bon voyage" video from Atlanta, and a video recap of his Las Vegas race experience.

Driver Kasey Kahne competed against Magruder in a series of western-style games at Canyon Creek near Phoenix. The Cowie Sisters pulled off some soccer trick shots at Phoenix International Raceway with the help of driver brothers Austin and Ty Dillon.

On March 13, on their journey from Phoenix to Los Angeles for this week’s races, up-and-coming NASCAR drivers Ryan Blaney and Darrell Wallace Jr. were handed the keys to NASCAR’s official Snapchat account.

Earlier this season, NASCAR announced a new partnership with Snapchat. The fast-growing platform will double its Live Story coverage of NASCAR races in 2016, and kicked off the season at the Daytona 500 in February.