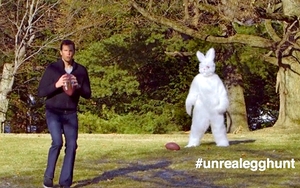 The Boston-based candy company -- which has often featured the clean-eating Brady and his wife, model Gisele Bundchen, in ads and promotions -- is selling limited-edition Easter tins and assortments, filled with its all-natural candy-coated milk chocolates and peanut butter cups.

The video for the effort, released on Brady’s Facebook page, shows the Easter Bunny in his bunny slippers, browsing for ideas on his tablet. He stumbles across a video of Brady hiding Halloween candy at Whole Foods stores, which inspires him to create the Golden Egg hunt. (Not to give anything away, but the “surprise” in the Halloween effort turned out to be hand-written notes from the quarterback.)

UnReal healthier offerings may hit just the right note this year. Market Track says that candy sales may decline this holiday, based on the noticeable last year in candy promotions, which fell 12% from the previous year. And Market Track’s 2015 survey found that just 22% of shoppers planned to purchase candy for Easter if was on sale, behind 36 categories. “As healthier eating becomes a bigger and bigger focus for U.S, consumers, candy holidays like Easter and Halloween may see a transition to new, healthier traditions,” it says.

But overall, retailers expect an eggs-cellent holiday. The National Retail Federation says spending on Easter celebrations is set to hit a record $17.3 billion, the highest in the 13-year history of its survey. That works out to about $146 per person, and a significant jump last year’s $140.62 per person.

The NRF says people are likely to spend $5.5 billion on food, $3 billion on clothing, $2.7 billion on gifts, $2.4 billion on candy and about $1.2 billion on flowers, with the majority, 58.4, intending to shop at discount stores. Almost a third plan to have an Easter egg hunt.

About 41.4% will buy from department stores, and 24.7% percent from local small businesses. And just over one in five will shop online, up from 18.8% last year.

The NRF survey, based on more than 7,200 adults, was conducted by Prosper Insights and Analytics.