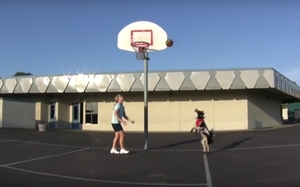 The brand is hosting a social “tournament” (#AcuraTourney) of popular viral basketball videos in a head-to-head Twitter competition as part of its multifaceted campaign, which also includes TV.

“Acura has had a strong presence surrounding the games for four consecutive years, and every year we have grown our presence through unique and engaging broadcast, digital and social efforts,” Cesario tells Marketing Daily. “Live sports, and college basketball in particular, are a great place to reach a prime target audience for Acura luxury intenders. We see significant increases in brand familiarity, brand favorability and ad awareness throughout this campaign.”

The campaign is focused on consumers who intend to buy in the luxury segment, she says. College basketball delivers a higher concentration of the Acura audience than any other major sport, she adds.

“Based on our learnings, when we take an all-screen approach and are contextually relevant, we break through [the clutter] and Acura becomes a part of the conversation,” Cesario says.

The TV campaign features key Acura vehicles, including the 2016 ILX and TLX sedans. Media includes a heavy sports and NCAA Tournament focus, encompassing a large footprint across broadcast, digital and social properties. This will include an extensive run throughout ESPN broadcast and ESPN.com’s Tournament Challenge, and during broadcast coverage of the Tournament on CBS, TBS, TNT, and TruTV, and on March Madness Live coverage.

For the social portion of the campaign, Acura has selected viral basketball clips on the Internet to battle it out on Twitter during the NCAA tournament. Through a series of Twitter conversational ad units during March Madness, users will be able to vote for their favorite videos and determine who goes on to the next round. After Round 3, a winner will be declared.