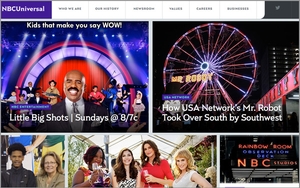 Formalizing its efforts over the years to produce original content and programming for advertisers, NBCUniversal will start the NBCU Content Studio.

The unit, developing short- and long-form programming to air on NBCUniversal and other platforms, will be run by Wendy Wildfeuer, SVP of The NBCU Content Studio.

Content is tailored for each individual platform; marketers can also use this content for distribution across their platforms -- mobile sites, apps and retail channels.

NBCUniversal will create this content through writers, directors, and talent as well as its network of production partners.

For a number of years, NBC has developed custom short- and long-form content for marketers. Some of its more recent efforts included content for Amazon, Fiat and Paramount’s “Zoolander 2.”

For NBC’s “The Voice,” NBC produced integrated deal for Kohl’s and Nissan. For “Today,” NBC worked with Citibank for The "Today" Concert Series. With “The Tonight Show Starring Jimmy Fallon,” it did a deal with General Electric, and for USA Network’s “Playing House,” it created partnership with Comcast, Samsung and Toyota.