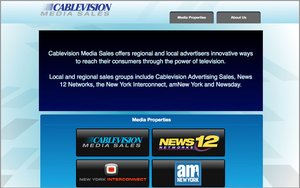 Cablevision Media Sales will expand the reach of its data analytics tools nationally -- beyond the New York-area market -- in a deal with FourthWall Media.

FourthWall’s set-top box data has been key for some companies, such as AOL, in looking to expand programmatic TV efforts. In addition, other companies. such as Visible World. use FourthWall data to deliver addressable TV ads, targeting TV set-top boxes.