Influenster Gets $8 Million From Ebates To Enhance Review Platform 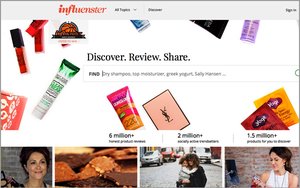 Influenster, a product discovery and reviews platform, announced that it has closed an $8 million dollar round of funding from Ebates, a subsidiary of Internet services company Rakuten.

Ken Hirschman, Ebates’ vice president of strategic alliances, will become a board member at Influenster as a part of the deal.

The money will be used to improve the platform and scale to meet the expectations of an ever-expanding market, according to a statement from Aydin Acar, CEO and co-founder of Influenster.

Influenster functions as a sort of crowd-sourced Consumer Reports, with a community of 1.7 million members who leave reviews of products, ask questions, take pictures, write articles, make videos, and provide links to available coupons and offers.

Influenster has both a Web site and a mobile app, available on iOS and Android. Its members currently write about 500,000 reviews a month.

Online shoppers are more likely to trust reviews written by their peers, though fraudulent reviews are always a danger. Many digital influencers are sometimes negatively influenced themselves by brands, in the form of free products in exchange for reviews. Amazon also has Amazon Vine, which does exactly that, giving early versions of products to reviewers.

This is the first round of funding Influenster has sought out, having been profitable since their founding in 2010.

Since it’s launch, the community has written more than 6 million reviews of about 1 million products.

Rakuten has also invested in Pinterest and messaging service Viber.