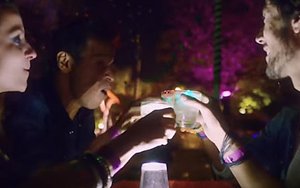 Absolut began rolling out the latest creative in its “Absolut Nights” campaign in the U.S. this week.

For its 2014 launch, “Absolut Nights” — an evolution of 2013’s “Transform Today,” the brand’s first global campaign — focused on “reinventing and infusing nightlife with creativity” by offering consumers one-of-a-kind artistic experiences in New York, Johannesburg, Berlin and Sao Paulo. The events were filmed by director Melina Matsoukas.

In 2015, as part of the continuing, integrated campaign, the brand debuted a short film highlighting those events and featuring a new track, “Welcome To My Life,” from Empire of the Sun.

Last year’s efforts also included an Absolut “Electrik House” party in Los Angeles featuring a backyard concert by Empire of the Sun, and the December launch of HOPPR by Absolut, a mobile platform that offers instant access to New York’s nightlife events.

”Over the past year, we’ve been able to engage firsthand with our consumers while seeding the definition of what it means to have an Absolut Night — a night built on epic moments of reinvention and imagination — through a series of worldwide events and multi-faceted advertising, PR and digital campaigns,” Nicholas Guastaferro, Absolut’s director of marketing, tells Marketing Daily.

Now, Absolut is “pivoting to encourage consumers to be spontaneous and define and create their own Absolut Nights,” Guastaferro says. The creative also “reflects the inclusive and diverse nature of the brand and our audience,” and seeks to “instigate” nightlife that “connects people across borders, barriers and labels,” he adds.

The first element is a 30-second ad, “Anthem,” created by Panay Films. It shows young adults reveling in nightlife activities like dancing and viewing fireworks, with a voiceover that begins: “You know those nights? They’re the nights that become day. Full of dancing and howling at the moon…the nights that remind us what it means to connect…that memories are made of…Those are Absolut Nights.”

The spot debuted on April 3 on the iHeart Music Awards on TBS and TruTV. It will also air on AMC’s “Fear of the Walking Dead” (April 10) and “Better Call Saul” (season finale, April 18), the Billboard Music Awards on ABC (May 22), and paid video/social on Hulu, YouTube, Facebook, Instagram and Google.

A second new TV spot — this one focusing on Absolut’s “one source” story (every bottle sold around the world is harvested, distilled, and produced in a small town in Sweden) — will launch in mid-summer.

Later this month, the brand will make its third appearance at the Coachella festival, hosting an #AbsolutNights extravaganza featuring an interactive bar with Absolut cocktails.

In the fall, new Absolut Nights creative will roll out globally.