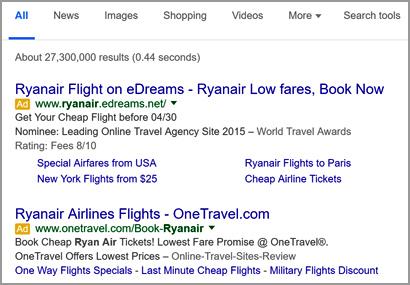 After the UK Advertising Standards Authority found eDreams advertisements running on google.com misleading, prompting consumers to book higher-priced tickets than those available at Ryanair.com, the airline's CMO Kenny Jacobs took to The Guardian Friday to air some dirty laundry.

Jacobs wrote an Op Ed piece explaining how Google continues to create confusion by allowing some businesses to run advertisements that mislead consumers. The ads are often related to services sold by competitors of well-known brands.

Google has become a utility that consumers and merchants cannot do without, Jacob wrote. Google has changed the way consumers use the Internet, but sometimes even Google gets it wrong.

Ultimately it comes down to trust -- a value Google professes to embrace, Jacobs wrote, pointing to Google's philosophy that "users trust our objectivity and no short-term gain could ever justify breaching that trust."

"If Google wants to deliver on its own promise to give consumers the best search results, it needs to get back to where it started and give consumers more reliable search results," Jacobs wrote. "More businesses in the UK and Europe need to stand up to Google, and it’s mostly small businesses that lose out, given that this is their biggest advertising output.

Google recently updated its quality rater guidelines, and Jennifer Slegg at The SEM Post does a good job of detailing the changes. Google put a de-emphasis supplementary content and an emphasis on mobile; local; along with page quality and E-A-T or expertise, authoritativeness, and trustworthiness.

"The amount of expertise, authoritativeness, and trustworthiness (E-A-T) that a webpage/website has is very important. MC quality and amount, website information, and website reputation all inform the E-A-T of a website," according to the guidelines.

Maybe so, but the misguided confusion, as Jacobs puts it, also occurs in the United States. Not only on google.com, but Google News with sponsored advertisements from publisher sites serving as articles in the News section, rather than paid search ads.

Earlier this year Marty Weintraub, aimClear founder, pointed to what he called "the greatest ranking algorithm gap in years, allowing marketers to literally buy their way into Google search results with paid content."

The credibility of the publishers such as Mashable, Search Engine Land, and Search Engine Journal help the advertorials to post high in the rankings on both Google Web and Google News.