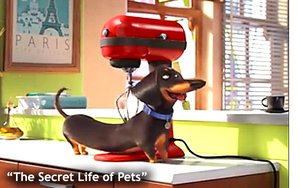 NBCUniversal will start a branded entertainment with Chrysler and Universal Pictures new movie “The Secret Life of Pets” on Monday.

The new movie from Universal Pictures and Illumination Entertainment, which debuts July 8, will work with the launch of the new 2017 Chrysler Pacifica brand.

Content will air across the company's networks and social platforms, as well as on Vox Media, beginning April 11 and continuing through July.

Digital and social platforms will feature content from the campaign through NBCU’s Social Synch program. Telemundo’s “Un Nuevo Dia” will use its digital properties to feature the content.

The marketing campaign will begin with NBC’s “Today.” Other content featuring the Pacifica, animation from “The Secret Life of Pets” and NBCUniversal talent, will appear on Golf Channel, NBCSN, Sprout and USA Network.

Since the start of the TV season, Chrysler has spent $33.0 million in national TV commercials, according to iSpot.tv -- about $21 million going to the major five broadcast networks.