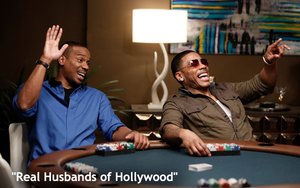 BET announced nine new shows at its upfront presentation in New York on Wednesday. But the network is also emphasizing a planned relaunch of its digital platforms next week as a crucial component of its sales and marketing efforts.

"BET's innovative partnership with WhoSay will allow brands to leverage African-American influencers with high-impact opportunities that will build authentic brand narratives and bridge the gap between celebrities and the BET audience," BET said.

Like other networks this upfront season, BET's digital enhancements are aimed at marrying the content on the company's linear networks -- BET (the cable channel) and its sister channel Centric, aimed mainly at African-American women -- with the engagement the network is seeing for its shows on social media.

"Not only is our content more authentic, powerful and relevant, but now it's more accessible across more channels and platforms than ever before. It gives our audience more ways to interact with the BET brand than ever before," said Louis Carr, president of media sales for BET Networks.

The scripted shows are: "Tales," described as a one-hour anthology series of "song stories"; "The Yard," a drama series about a fictional historically black college; "Benched," a series BET is billing as a dramedy about a swinging bachelor who is appointed to a judgeship and then must give up his free-wheeling bachelor's lifestyle; and "Rebel," a cop drama that will explore the challenges faced by "police officers of color" in an era of racial conflicts between police and minority communities.

The four nonscripted shows are: "Music Moguls," a series of biographical documentaries about some of the best-known impresarios in popular music; "Gary Owen Family," starring a white comedian -- Owen -- described by BET as "arguably Black America's most-beloved non-Black comic"; "Joyful Noise," a gospel music showcase; and "One Shot," a rap-and-performance competition show that will try and discover new hip-hop talent.