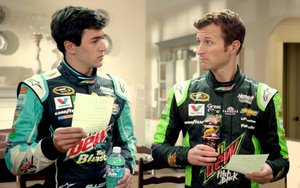 Mountain Dew has partnered with NASCAR stars Dale Earnhardt Jr., Kasey Kahne and Chase Elliott to help conduct a competition between two of its flavors.

DEWcision 2016 asks consumers to choose between Mountain Dew Baja Blast or Mountain Dew Pitch Black. Fans can vote to help determine which of these flavors will be added to the permanent lineup.

This year is the first time the brand will field a three-driver lineup, welcoming drivers Chase Elliott and Kasey Kahne, in addition to Earnhardt Jr. PepsiCo recently signed a three-year extension for its partnership with Hendrick Motorsports, Furlow tells Marketing Daily.

“NASCAR is a great fit for Dew because we each have a very passionate fan base that enjoys having a damn good time,” Furlow says. “Similar to how NASCAR fans full-heartedly get behind the drivers, the teams and the sponsors, so does Dew Nation behind the flavors and experiences they live.”

Now through July 9, fans can vote for their favorite flavor on DEWcision.com or Twitter by including one of the following hashtags: #VoteBajaBlast or #VotePitchBlack. Every hashtag will count as one vote. Super delegates — or fans — can also complete challenges to rally for their favorite flavor. These challenges will be released every third week on the @MountainDew social channels. The flavor with the most votes at the end of the program wins a spot in the retail lineup.

“Each year we get hundreds of thousands of requests for these two flavors on social, sometimes with fans organically pitting Pitch Black and Baja Blast against each other,” Furlow says. “We made this campaign for Dew Nation, to say thank you for being such awesome fans and giving them the power to decide which flavor stays.”