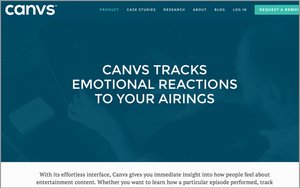 Launchpad will use Canvs to serve as a sort of virality barometer for Turner’s property’s social media posts. It can tell marketers which jokes are the best jokes, or the ones that people respond to the most—but perhaps the boldest claim that Jared Feldman, CEO of Canvs makes, is that his platform can understand the “why” of virality and shareability in social media.

“We want to replace the focus group, long-term. We want to do anything we can do to advance the modernization of market research,” says Feldman.

While still technically a start-up, Canvs has achieved a fairly expansive scale and has inked several large partnerships in addition to Turner, including Nielsen and Viacom.

Jared Feldman, CEO of Canvs, stated the company "achieved scale a year and a half ago. Any scale-related concerns we crushed with our initial partnership with Nielsen. We’re not even close to reaching our capacity.”

Branded content is starting to take a leading role in the marketing mix because consumers dislike so many other formats on social media, which they view through their phones. “There is a trend happening around branded content from a macro industry level,” says Feldman. “Every media company is figuring out how to monetize their footprint.”