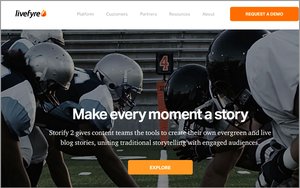 Jordan Kretchmer, Livefyre founder and CEO, said the deal was necessary for Livefyre achieve its next phase of growth.

“Because of Adobe’s incredible platform and footprint with marketers, we’ll be able to quickly expand to provide user-generated content and user-engagement tools to a larger customer base,” Kretchmer said on Tuesday.

Per the partnership, Adobe was hoping that brands would combine content from its Creative Cloud service with social content discovered and curated by Livefyre, then deliver the resulting content using Adobe Experience Manager.

Also, earlier in 2015, Adobe and Salesforce Ventures led a $47 million investment in Livefyre.

Since its debut in 2009, Livefyre has expanded from a system for social commenting to a platform powering live chat, live blogs, instant messaging, content curation and other social features through its StreamHub product.

Brands and publishers use the software-as-a-service platform to improve social interaction on their Web sites and other digital properties.

Rather than defer to Facebook or Twitter for their community-building efforts, brands are increasingly building out their own social-friendly properties -- with good reason. According to Forrester Research, U.S. online adults are nearly three times more likely to visit a brand’s Web site than to engage them on Facebook.

In one case, Livefyre helped Sony build a social-focused microsite around the launch of its PlayStation 4 gaming console, Livefyre reports. The site, GreatnessAwaits.com, attracted a readership of roughly 75,000 fans who visited the site around 4.5 million times. On average, they stuck around for about four minutes per visit.